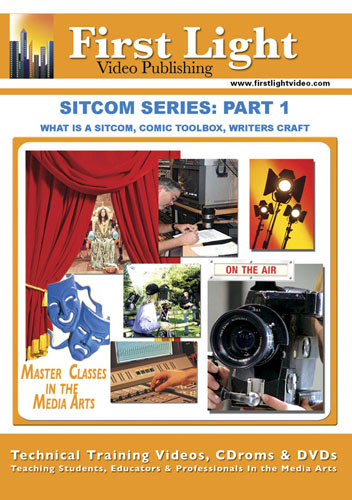 Sitcom Series What is a Sitcom, Comic Toolbox, Writers Craft

3 DVD Set includes the programs: What is a Sitcom, Comic Toolbox and Writers Craft. This series is valuable for anyone writing comedy and absolutely essential for writers attempting the highly structured and demanding sitcom form. Featuring producer/creator Norma Safford Vela (Roseanne, Designing Women) writer and lecturer John Vorhaus (The Wonder Years, Married With Children) and writer/producer Russ Woody (Murphy Brown, Slap Maxwell) as they explore every aspect of the sitcom craft. What is a Sitcom: Norma Safford Vela and Russ Woody define the sitcom form and detail the essential ingredients of a good sitcom. A undamental ingredient, they agree, is emotional truth and honesty. Comic Toolbox: John Vorhaus defines the characteristics of a good comic premise, and how to set about finding one. He stresses the importance of a central character with strong comic perspective on the world and shows how to endow that character with exaggerated flaws balanced by endearing human traits. He reveals the Rule of Three, the Low of Cosmic Opposites and other tricks from his comic toolbox. Writers Craft: John Vorhaus defines the essentials of two act and three act comic structure, A and B stories and the three levels of comic conflict. He presents several strategic approaches to the writing craft, including vertical and lateral thinking, the "mining and refining" approach to overcoming writer's block and the process of working from an outline.

BACK TO: Journalism & Broadcast
PREVIOUS TITLE NEXT TITLE