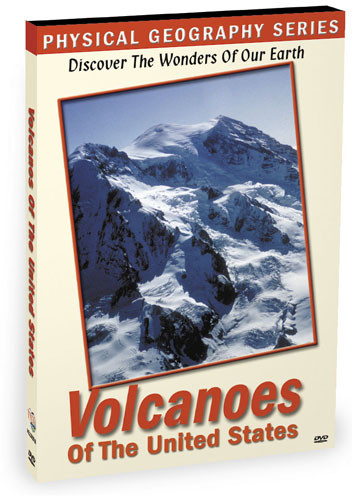 Discover The Wonders of Our Earth and the forces and life forms that shape our world with the Physical Geography Series. The United States is fortunate to have active and dormant volcanoes in many of her Western States. This program visits some of the most prominent volcanoes in America including: Craters of the Moon in Idaho, Mount Lassen in California and Mount St. Helens in Washington. Subjects covered include: Where volcanic activity has taken place in the U.S., How volcanoes are classified, The difference between a Shield Volcano and a Composite Volcano, Why and where volcanoes occur along the Pacific Oceans Ring of Fire, Lava tube tunnels, lava fields and volcanic caves, Visualization of volcanic terms such as lava, lava bombs, ash, pyroclastic flows and pumice.

Discover The Wonders of Our Earth and the forces and life forms that shape our world with the Physical Geography Series, a library of programs dealing with natural phenomenon such as volcanoes, earthquakes, caves, rocks, geysers and glaciers. The series is presented by Dr. Laurence J. Jankowski, an Associate Professor at Bowling Green State University in Ohio and a member of the National Science Teachers Association and the National Association of Geology Teachers. His prior achievements include the Science Teacher of the Year Award, from the Ohio Academy of Science and Outstanding Professor Award from Bowling Green State University.

Using lovely film footage of nature, the program discusses the forms of water, explains waters impact on the land through which it flows and follows the hydrologic cycle of water. Technical terms appear on the bottom of the screen, followed by a concise definition, amply illustrated by video clips. The slow pace of narration enables students to take thorough notes. The content is geared to students with little or no prior knowledge about the topic. The program could be used to introduce a science or geography unit. - School Library Journal.