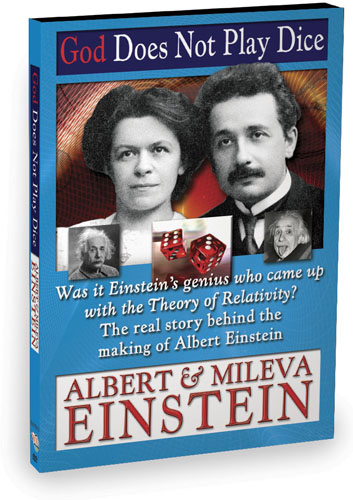 Was it just Einstein's genius who came up with the Theory of Relativity? Or was it someone else? The real story behind the making of Albert Einstein. A fact-based drama about the young and would-be-famous scientist, Albert Einstein, at a critical point in his young life as he starts to formulate his innovative world shattering ideas. In 1905, the young and unknown Albert Einstein, a third class clerk in a Swiss Patent office, made his most revolutionary of scientific discoveries. He underwent an intense intellectual and spiritual transformation as he worried about his real place in the world, as he obsessed with trying to figure out how the Universe really worked, Einstein struggled night and day to produce the four papers that revolutionized Modern Physics, including the Theory of Relativity. But who was really behind the Einstein genius and who transformed the then arrogant and tunnel-visioned young man into one of the most expansive thinking and humanitarian spirits known to Civilization? Some say it was his first wife and scientific collaborator, Mileva, despite their rocky marriage, who was the real brains behind Albert's work as well as the impetus that turned him into the pillar of human wisdom and social enlightenment he was to become. Perhaps it was the self-taught janitor who visited the couple after hours. The janitor entered their lives at a crucial time. What kinds of conversations would the socially-distant twenty-something Einstein have had with a gregarious, semi-literate, yet very common sense janitor who talked about life, science and relationships with the 'respectful rebel' scientist and his wife? He made them face themselves and appeared to influence whether they stayed together, or destroyed themselves and each other. Albert Einstein (1879 -1955) was a German-Swiss-Austrian-American theoretical physicist who made great advances in science. He is one of the most well known scientists of the twentieth century. He is most famous for his theory of relativity, development work with quantum mechanics, cosmology and statistical mechanics. His achievements include the Nobel Prize for Physics in 1921.

Who were Really Behind these Genius, Histoic Figures of History? Inventor Nicola Tesla, Physicists Albert (and Mileva) Einstein and Dictator 'Comrade' Joseph Stalin. Few people influenced the first half of the twentieth century more than they did, but who influenced them? Who turned them around at critical times in their lives such that they changed the world irreversibly during and beyond their lifetimes? This series of fact-based dramas portrays the minds, accomplishments, philosophies, hearts and human struggles of these incredibly smart and mentally-defective souls in ways that have never been told. History records the events in the lives of Tesla, Einstein & Stalin whose contributions made our world the cultural, technological and political world it is today. We constantly crave to know more about these heroes or villains but ultimately, these real-life-legends were human and had, like ourselves, crucial turning points in their lives. This series shows the struggles of these famous historical saints and sinners, through the eyes of 'ordinary' people who saw who they really were, and could be. Through these accidental 'visitors', we are shown the heart, mind and soul of the larger-than-life figures who have shaped the way we look at the world. Students will gain a deeper appreciation of how any 'ordinary' person can become a genius in the service of humanity, or a madman who nearly destroys it. The stories are told through drama with comedic undertones and humorous moments that make these famous figures more approachable, understandable and human.

BACK TO: Famous Scientists
NEXT TITLE