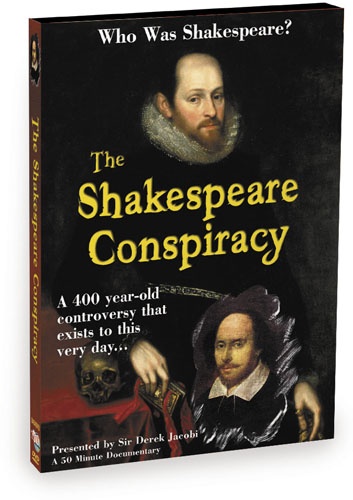 Featuring Sir Derek Jacobi, Tony Award Winner & Veteran of the London Stage. Who was the man who wrote these plays and poems? Was the author a grain-dealer named William Shakespeare born in Stratford-upon-Avon or Edward de Vere, the 17th Earl of Oxford? Why there was a 400 year-old conspiracy to hide the true author? This program provides a stimulating and controversial point of view that is bound to provoke classroom discussion and independent study of the Authorship issue. Drawing on original 16th century documents and the Oxford Bible, this film makes a full investigation into the lives of both Edward de Vere and William Shakspere of Stratford-upon-Avon. Revealing the former as someone already in his own lifetime revered as the best for comedies and the latter as a man who led a double life: prosperous merchant at home, well-paid frontman to the Elizabethan era's greatest poet in London. This documentary also examines modern attitudes of scholars with a vested interest in the Stratfordian myth and their suppression of relevant facts to this very day. Sir Derek Jacobi is a protg of the legendary Lawrence Olivier and was a good friend of Sir John Gielgud. He has starred in Shakespeare roles in London and on Broadway and is a Broadway Tony winner for his performance in Much Ado About Nothing. Recently he has starred as Gracchus in the blockbuster movie Gladiator. Written & Directed by Michael Peer, Produced in association with Paul Streitz.

3 Stars. "This reasoned inquiry into the authorship of the plays and sonnets credited to one William Shakespeare provides serious mind granola on which to chew. Narrated by noted actor Sir Derek Jacobi, The Shakespeare Conspiracy explores the currently trendy argument (first advanced in the 1920's, but really gaining notoriety in the 1980's and 1990's) that Edward de Vere, 17th Earl of Oxford, penned the works we today associate with the biographically-challenged William Shakespeare. Given the renascent interest in Shakespeare, this interesting documentary (which garnered writer-director Michael Peer several European awards) combining scholarly assessment, generous film clips from the plays, and on-location footage, is sure to be popular. Recommended." - Video Librarian. "As narrated by noted Shakespearean actor Derek Jacobi - and authenticated by an international group of Shakespearean scholars - the case for the 17th Earl of Oxford is a teasing exercise in literary detection. The clues to be found here are sufficiently tantalizing to keep this issue alive for some time to come. Recommended." - Library Video Journal.