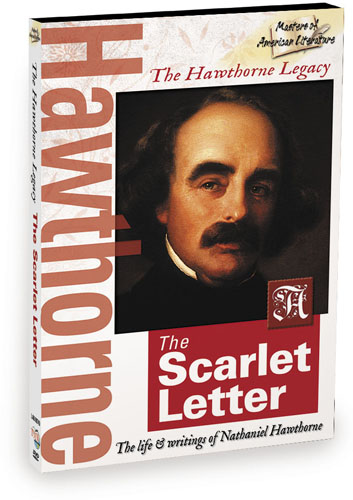 The Hawthorne Legacy The Scarlet Letter

ABOUT THE AUTHOR: The Hawthorne Legacy completes an overview of Nathaniel Hawthornes life (1804-1864) and selected works published in nineteenth century American literature. Amongst his many novels, The Scarlet Letter which still reflects the moral and ethical dilemmas men and women face today, is explored in depth. This program is the first of three Masters of American Literature series produced and directed and hosted by James H. Bride ll to include The Melville Legacy, and The Mark Twain Legacy. ABOUT THE PROGRAM: The Hawthorne Legacy offers students and teachers an overview into the life and writings of Nathaniel Hawthorne, a pre-eminent 19th century American novelist. Divided into five chapters each program is intended for class discussion and individual learning. Experienced scholars will explore themes, ideas and writing style in several short stories and The Scarlet Letter. This program will examine and explore why his historical and moral concerns then, are still appropriate for discussion today. CHAPTER CONTENT: Chapter 1 Brief Hawthorne Biography: Nathaniel Hawthorne was born in Salem Massachusetts in 1804 and died on vacation at Plymouth, New Hampshire 1864. After graduating from Bowdoin College, Hawthorne lived in Salem, Concord, and Pittsfield Massachusetts then later, as American consul in Liverpool, England. For his final Concord years, Hawthorne resided at Wayside in a neighborhood that included Emerson, Thoreau, the Alcotts and other transcendental writers. Chapter 2 Writing & Working: Even though writing was his personal and professional passion; Hawthorne had to work in various occupations to supplement his meager manuscript royalties. From his working experiences in the Boston and Salem Custom Houses, as well as Brook Farm- a transcendental community in West Roxbury, Massachusetts - Hawthorne developed plots for the Scarlet Letter, Blithedale Romance, several tales and short stories. Chapter 3 Fictional Historical Characters: Several Hawthorne stories are based upon his 17th century ancestral colonial connections. In particular was his puritanical family lineage fraught with the persecution of Quakers and witches that provided a dilemma for his fictional characters. Major characters discussed in detail include: Hester Prynne, Arthur Dimmesdale, Roger Chillinsworth, Ethan Brand and Young Goodman Brown. Chapter 4 Narrative Themes: Is rich with figurative language, moral and ethical issues, character development & historical events in 18th century New England. Various literary issues from Ethan Brand, Young Goodman Brown, The Ministers Black Veil, Rappaccinis Daughter and The Scarlet Letter will be compared and contrasted. Chapter 5 The Scarlet Letter: Published in 1850, offers multiple interpretations by scholars: Larry Reynolds, Brenda Wineapple, Millicent Bell, William Waterson who remind us how Hawthornes insights and observations prove relevant then as well as today. About the Host & Presenters: For over twenty years James H. Bride 11, Host, has been producing and directing educational documentaries focusing on American and British writers. The Hawthorne legacy Presenters include; Richard H. Baker, Professor, Noble and Greenough School, Brenda Wineapple, Professor at Union college; Larry Reynolds, Professor at the University of Texas; Millicent Bell, Professor Emerita, Boston University; William Waterson, Professor at Bowdoin College. All offer illuminating and fascinating interpretations for everyone to understand and enjoy.

Three great American Classics and Authors of the 19th Century. Nathaniel Hawthorne, Herman Melville and Mark Twain, each wrote American classics that firmly establish these writers as three of America's most important authors. They have shaped and influenced American literature to such a degree that their names stand out as truly exceptional, American authors of the 19th Century. For over twenty years James H. Bride II, host, has been producing and directing educational documentaries focusing on American and British writers. This series is an invaluable addition to class curriculum providing immediate access for students and teachers offering insights and interpretations to help explain the literary works of these literary giants.

BACK TO: Masters of American Literature
NEXT TITLE