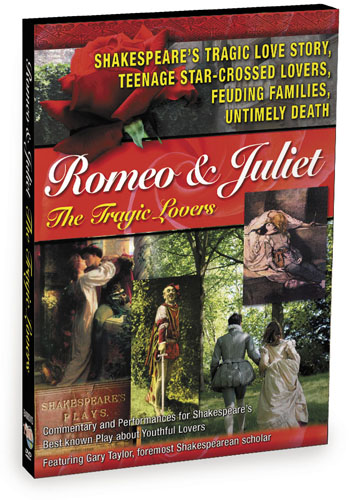 Romeo & Juliet - The Tragic Lovers, offers insight, commentary and staged performances of Shakespeare?s famous tragedy of star-crossed lovers. As a companion to the literary interpretation, actual dramatic scenes filmed in Verona, Italy are used as Shakespeare had intended in his original play. Scholar and host, James Bride, introduces factual information about Shakespeare?s play by referencing a digitally enhanced version of the Prologue. Gary Taylor, Editor of the Oxford Editions of Shakespeare?s Complete Works, offers an engaging dialogue about the historical background of exotic Verona, use of boy actors, staging challenges and 16th Century sacred and secular attitudes that influenced the writing of the play. Additionally, Judith Annozine covers the humor in this play providing insight into the characters and role of the Nurse and Mercutio in advancing the action. ABOUT THE PLAY: Romeo & Juliet is a tragedy written by William Shakespeare about two teenage ?star-crossed? lovers whose untimely deaths reunite their feuding families. An emotional powerhouse, this adaptation of the original story for the stage transports the audience to another time and place, 16th Century Verona, using Shakespeare?s text and Elizabethan costumes and staging to enhance the drama. The civil strife between the Montague and Capulet houses provide the backdrop for the love story and tragic death of Romeo and Juliet, all of which take place within a condensed period in dramatic time of just four and one half days. Shakespeare?s command of dramatic structure is evidenced by his juxtaposition of comedy and tragedy to heighten tension and expansion of minor characters ? the Nurse, Friar Laurence, Mercutio and Tybalt, as well as sub-plots to embellish the story. The Tragic Lovers is an epic romance of tragic proportions that contains some of the most compelling and romantic verse ever written set against the erupting violence of feuding families and civil unrest. STUDENT & TEACHER BENEFITS: Dramatic performances are shot in Verona, Italy where the original play takes place using talented Shakespearean actors to portray these important roles. Relevant performance scenes highlight commentary for all Five Acts. The actors articulate words and thoughts clearly making the 16th century language easier to understand. Performance with an additional musical score enhances the varied scene moods. Assigned written exercises will significantly improve as students understand the characters, events, language commentaries and performance. ABOUT THE PRESENTERS: James H. Bride, Host, has produced and directed educational programs for the Apple Learning Series, Films Media Group, Columbia University Press, Thomson Learning and TMW Media Group. The Tragic Pair, The Tragic Lovers and In the Steps of Shakespeare, London & Stratford were produced exclusively for the TMW Media Group. Gary Taylor, Commentator, Florida State University, George Matthew Edgar Professor, Ph.D., Cambridge, is co-editor of the Oxford University Press 1986 and 2005, The Complete Works of William Shakespeare. Judith Annozine, Commentator, is a graduate of Columbia University, former lecturer at Rutgers University and gifted actor. Her interpretations and explanations are important to understanding Shakespeare?s humor and general information in the play. Includes Bonus Interview with Gary Taylor: Taylor discusses general topics including the Soliloguy, general text challenges, the authenticity issue and his discovery of a Shakespeare poem in 1986, Shall I Die, Shall I Fly.