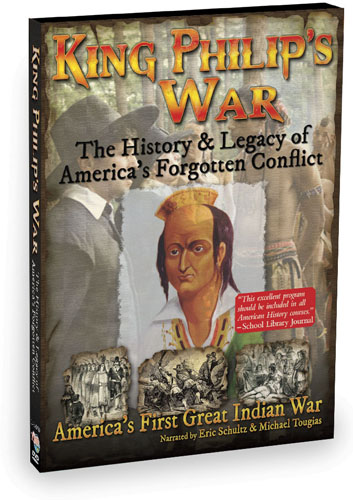 An educational documentary examining the causes & effects of the America’s first great Indian War. ABOUT THE PROGRAM: King Philip’s War, took place between June 1675 and August 1676 between the colonists of the Massachusetts Bay Colonies of New England and the Native American, Wampanoag Tribe in what is considered the bloodiest war per capita in this country’s history. King Philip was the name given to Metacom, the great chief of the Wampanoag Tribe. He was the son of Massasoit, the chief who made contact with the Puritans when they settled at the Massachusetts Bay colony of Plymouth. By 1675, friction between the Wampanoag Tribe of Southeastern New England and the English colonists had reached the boiling point. The increasing appetite for land by the growing population of colonists was usurping Native American territory. On June 20, Metacom, ordered an attack on the settlement at Swansea, Massachusetts, precipitating a war that destroyed his tribe and nearly bankrupted the Plymouth and Massachusetts Bay colonies. On August 12, 1676, Colonial soldiers under Benjamin Church surprised King Philip and his band at Mount Hope, where Philip was killed by the Pocasset, Alderman, with a bullet through the heart. On the orders of Church, King Philip’s body was drawn and quartered and his head sent to Plymouth where it remained on display for 25 years. When the war ended with the death of Philip, 3000 Native Americans and 800 English had been killed, a staggering mortality given the population of that time. The Wampanoag tribe was devastated, with most of its members either killed or sold into slavery, including the wife and son of Philip. The Massachusetts Bay Colonies were nearly bankrupt. Native Americans and historians of the period believe this war was one of the most significant seminal events in American history. STUDENTS WILL LEARN: Who was King Philip? From which country had the New England colonists arrived? What was the primary cause of the war? How did the Native American concept of land differ from that of the colonists? How did the Native American style of fighting differ from that of the Colonists in the early stages of the war? When and where was Philip killed? What were the three main reasons why the Wampanoags lost the war? What were two significant consequences of the war? ABOUT THE NARRATORS: Eric Schultz and Michael Tougias are best-selling authors of, King Philip’s War: The History & Legacy of America’s Forgotten Conflict. Both authors provide narration and historical commentary throughout the program. Also featured are present day Wampanoag historians including Russell Peters, former head of the Wampanoag Council, Ella Sekatau, Narragansett historian, Linda Coombs and Nancy Eldridge, Wampanoag historians, and Richard Pickering, historian formerly of the Plimoth Plantation. Filmed live at Plimoth Plantation and other locations around New England. Includes informative maps illustrating battle sites and historical markers.

“This excellent program should be included in all American History courses.” – School Library Journal